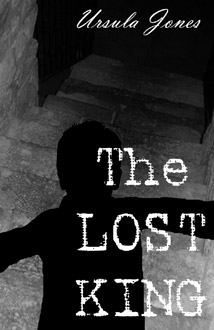 The Lost King. First published by Inside Pocket and now available as an eBook

Khul, a proud kingdom founded by slaves, is invaded. Its king is slain, his family in hiding, and resistance brutally suppressed.

Slaves once more,  its people still whisper the forbidden name of the dead king’s son: ‘Avtar.’ Is he alive? Will he return to save them?

Thirteen year-old Watt is a Ghosty Boy, so called for the flour-covered uniform of the Baker’s apprentices. Overlooked and forgotten, his only ambition is  to survive.  But his sister Melior, hidden in the tangle of secret staircases deep within the castle, is planning to escape.  His decision to help her will change Khul’s destiny ....and his own.

After years hiding out in plain sight, a royal heir sparks a revolution in his conquered city. Despite brutal repression, rebellion is already simmering in Khul, renamed "Slave City" after the bloody invasion by the lighter-skinned Policy Makers six years before. When the arrival of the Policy Makers' imperial Roc and his 13-year-old daughter, Fidelis, on a state visit sets off a coup attempt by his own subordinates, events escalate. The whirl of intrigue and increasing tensions catches up young Avtar—disguised since the murder of his royal parents as a flour-covered "Ghosty Boy" in the castle bakery—and culminates in a wild series of attacks, betrayals, chases, revelations, encounters on hidden staircases and improbable alliances.

Just for fun, Jones also stirs in a flatulent lap dog and a prank that sends most of the Roc's entourage hustling for the toilets, as well as providing amusing interchanges aplenty (" 'Did he really call me an untrusting cow?'…'Who'd call you untrusting?' he asked. 'Or a cow?' he added, just in time"). There are also a massive climactic storm and so many extremely convenient coincidences that it's obvious some unseen supernatural player is at work. Sequels are certain, since the closing détente leaves almost everything unresolved.

A violent, madcap, frequently entertaining scramble. Avtar's, the king's heir, was caught in the middle of a brutal coup. His family was murdered or scattered and he was left in the castle. He fell in with the Baker, who turned him into Watt, a baker's apprentice. After the ROC, the ruler of the empire, comes for a visit, Watt stumbles into his sister Melior, and their lives are turned upside down again. I found this a very well written, well paced and interesting book.